By Camilla Tafra on October 2, 2017 in Musicians, Performers’ Perspectives 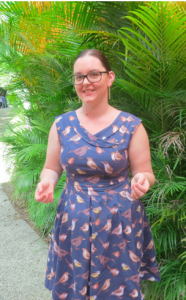 I presented my research at ASPAH in 2015. I was identifying the most common postural issues in children learning music and finding what cues and strategies we could give these kids to help them improve. Unsurprisingly, the research shows that if you tell kids about this stuff, they do improve, unless they really don’t care. I was never told any of this. I was always just told, “Sit up” and that was it.

What do you think the main points of your research were?
I think you should tell kids it’s not normal to be feeling pain. You can feel uncomfortable, but if you’re feeling pain, that’s not something you need to keep practicing through. You should talk to your teacher about it and your teacher should be equipped with lots of different ways to help you. I teach my kids stretches now and we do stretches regularly. I do stretches myself and go to the gym twice a week because I find for me – after years of abusing my body – an upper body workout is the way I get those muscles to relax. The physio who I work with now is very preventative. He taught me a bunch of stretches and then said “when you’re not in pain every day you can go and do workouts, and go and build those muscles instead”: the preventative approach. Unless I’ve been really stressed and working at a computer late in the night, I don’t have any pain in my shoulders, which I don’t think I could say for a single week during undergrad. There wasn’t a week where I woke up and said “Wow, I’m not in pain today.”

What is the biggest challenge you’ve faced in your career so far?
I had to think about what I wanted to be. Which is a bit of everything. I want to play and I want to do chamber music and I want to do orchestras – I’m in 2 orchestras as their principal flute at present. Physically, I had an ulnar nerve entrapment at the elbow. I got it in grade 12 when I was practicing a lot for MOST. I bombed that audition because my fingers stopped working. I went to a doctor and they were like, “it’s probably just repetitive strain injury,” and said, “rest it for a week.” And it kind of got sort-of better, but it remained a constant problem for 9 years. But not enough… just enough that I wasn’t very good with these two fingers. During my masters, they stopped working more and more. I was doing an hour at a time of practice, ‘ergonomic’ practice I guess, not five hours at a time – because I couldn’t practice any longer or my fingers would stop working. And this isn’t something you publicise if you want to keep on playing principals in orchestras, because nobody wants someone whose fingers don’t work. And I think there’s a lot of shame around injuries, especially if they are career stopping or career pausing injuries, because “You don’t want to tell anyone about that or they won’t give you a gig. And you won’t get paid. And then someone else gets the gig and they keep getting the gig, and you don’t get the gig because you’ve got crippled fingers.” But now I realise, I don’t really care so much about that.

I was misdiagnosed with focal dystonia. Then I went away and read about it, and came back and said, “I don’t agree. Actually, none of the literature supports what you are saying and none of my experiences support what you’ve diagnosed me with.”

How did they react?
Well, he said, “tell you what, I’ll send you to a hand specialist and they can do an EEG.” And he didn’t find anything. And so I called him up and said, “Can I just come into your office for twenty minutes and do this [demonstrates fingering]”. Because when I saw him I wasn’t showing any severe symptoms because I hadn’t been practicing that day. So I went and sat in his office and did this until my fingers literally… it feels like they’re going to sleep and then they feel dead, like you can’t feel them properly. So I went and did that and then he shocked me, and that was fine. And he said, “hey look at that, you have nerve entrapment at the elbow, my God!” And then we scheduled surgery the week after… and I woke up and I can move these fingers – I can’t believe it!
And I think the worst part about it was that I’d always complain to my teachers, but because these are the worst fingers anyway [3rd and 4th], they’d say, “No, just practice more, because they’re weak naturally – you’re right handed, and they’re your two worst fingers on your left hand.”

I think students who are learning – even if you don’t experience injuries personally, you should make at least a cursory effort – you should do at least one semester of courses where you look over performance injuries, performance injury prevention, and discuss it in a more open environment. I think people just need to be more open about it. The more people discuss physical disabilities or the issues they are having and try to solve them, rather than just acknowledging them, I think we can actually move towards doing something about them. And making a more positive culture about it. Because so many people I meet have horrendous injuries. And they’ve just accepted that pain is going to be a part of their everyday life from now. And regardless of whether you’re good at playing music, I don’t think that’s a good pedagogy because it’s not good to push your students so far that they are physically crippled. And I know that’s not a PC word to say, but I get really angry about that.